This is an entirely unscientific term to describe the sudden onset of frantic licking of anything in range such as carpet, bare floor, walls etc. and the indiscriminate eating of anything that can be swallowed such as grass, leaves, fiber from carpets etc. and gobbling up of air. It is obvious that the behavior is due to severe gastrointestinal discomfort. It sometimes can be alleviated with medications such as Digel, Gas-X or other gas and acid reducing remedies. Often, hydrogen peroxide to induce vomiting will help. What exactly causes the "Swissy Lick" is a matter of discussion among Swissy owners but there seems to be no single or definite factor responsible for this condition. Any number of theories have been offered, from excessive gas pressure to acid reflux to allergic reaction to a food substance. Some believe that it is a precursor to GDV but this cannot be clearly substantiated either as many Swissys who have had these licking episodes never went on to develop GDV. While the condition appears to affect primarily young dogs, it has also been reported in older Swissys.  Often young dogs eventually outgrow this condition.

If you are seriously considering adding a Greater Swiss to your family, please do take the time to read these articles.

The Beginner's Guide to The Greater Swiss Mountain Dog

Both above descriptions courtesy of Brigitte Rhinehart of Brush Creek Farms

Is a Greater Swiss Mountain Dog Right for You?

With this condition, the spleen rotates around its own axis, either away from or towards the stomach. The spleen then becomes engorged with blood and may expand to several times its normal size. If the spleen rotates away from the stomach it may torsion several times. As many as six revolutions have been observed. If the spleen rotates towards the stomach it may pull it along causing a partial or even complete gastric torsion, creating a very dangerous and potentially fatal situation calling for instant medical attention. Unless the stomach is involved and obvious signs of GDV are present, unfortunately the signs of splenic torsion are often quite vague and may vary from case to case. Signs may include: - Inappetence - Vomiting - Diarrhea or constipation - Low level fever - General listlessness - Tucked up abdomen, tenderness of the abdomen or slight abdominal distention - Pale gums. Splenic torsion is a life-threatening condition which requires immediate veterinary care. In a surgical procedure called splenectomy, the spleen is removed. Often, a gastropexy (stomach tack) is performed at the same time if the animal's conditions allows this additional procedure. The causes of splenic torsion are not known. Like with GDV, the condition seems to primarily affect large deep-chested breeds. In Swissys, dogs over the age of 5 years appear to have a higher incidence, however, quite a few cases of younger Swissys have been reported. For the GSMD, splenic torsion unfortunately is one of the major health problems. Indeed, many breeders believe that probably a significant number of dogs that supposedly died of GDV but were not necropsied after their death, actually might have succumbed to splenic torsion. As with GDV, the most important tool to prevent a fatal ending to splenic torsion is to recognize the signs and get immediate veterinary care. Remember, splenic torsion will kill if not recognized in time to perform life-saving surgery. 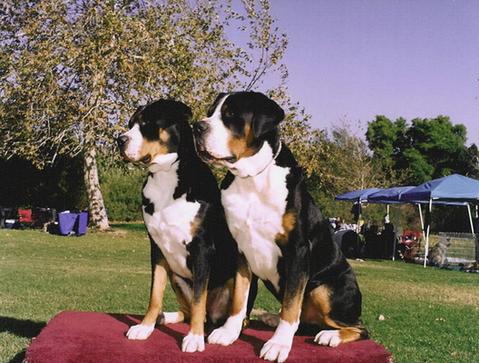